Tunbridge Wells Borough Council currently has 48 Councillors who are each elected for a four-year term. The Borough area is divided into 20 roughly equal 'wards'. The Councillors are elected to, and represent, their local ward.

The Borough area (represented by the blue lines below) runs from Speldhurst and Bidborough in the West, to Hawkhurst and Sandhurst and Frittenden and Sissinghurst in the East, with the main settlements being Royal Tunbridge Wells, Southborough, Paddock Wood, Cranbrook and Hawkhurst.

There are 14 Parish Councils and two Town Councils within the Borough area with separate Parish and Town Councillors representing these administrative bodies.

There are also two Members of Parliament who represent the Borough area.

This consultation relates specifically to Tunbridge Wells Borough Councillors only. 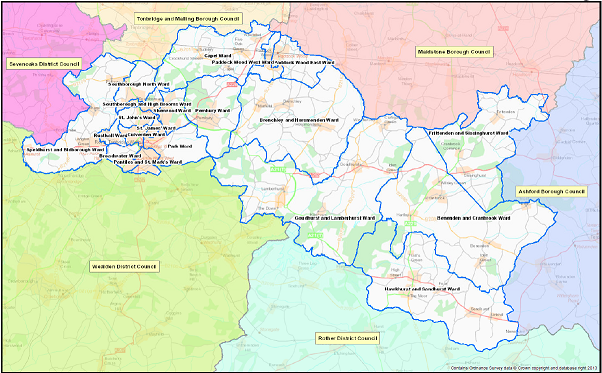 The table below compares this ratio with a group of 14 other authorities of a similar size and type to Tunbridge Wells Borough Council (our CIPFA Nearest Neighbours grouping).

The role of a Borough Councillor

Borough Councillors are responsible for a range of different tasks and functions.

Primarily they are responsible for representing the views of the people in the ward in which they are elected to. They also assist residents in their area with a variety of issues that can include problems with benefits payments, informal (non-professional) advice and guidance around planning applications, and signposting to a range of other authorities and organisations with specialist help available (such as adult social care or mental health support provision). This work is known as ward work and is an important part of being a Councillor.

Borough Councillors also attend a range of informal or non-public meetings with officers to discuss issues and plans in depth before they come to public meetings for decisions. These meetings tend to be held during the day.

Borough Councillors receive a small allowance for the role they perform which is expected to cover the costs of any additional IT equipment, and the additional costs for printing, phone calls, and utilities for the work that they do for the Borough.