The Deputy Mayor of Tunbridge Wells 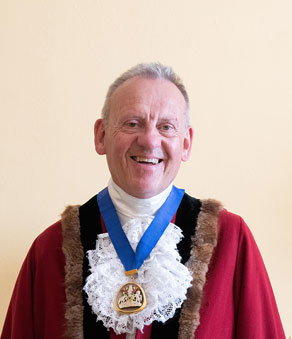 Hugh Patterson represents Capel Ward (which covers Five Oak Green, Tudeley and the surrounding hamlets). He was most recently elected in 2021 and has won five out of seven elections there since 2000. He was first elected to Tunbridge Wells Borough Council in 1987 for St.Johns Ward, he also served a term on Sevenoaks District Council in the 1990’s.

Hugh is a Man of Kent born in Sheerness and bought up in Sittingbourne. He was educated at Borden Grammar School and then went to Bristol University to read History. Having gained a PGCE he first moved to the borough in 1980 to teach at Tunbridge Wells Girls Grammar School where he stayed for eight years. After three years working in Italy, he returned to teaching when he became Head of History at Woldingham School near Oxted. He remained there until he retired as Head of Department in 2016, though he remained until 2022 teaching History and Politics part-time. He is also an A level History examiner.

Hugh is married to deputy Mayoress Sandra, and they have lived in Five Oak Green since 1998. They have two grown up sons who were both educated at Capel Primary School and Bennett Memorial before going on to university.

Hugh is the longest serving member of Capel Parish Council and since 2018 has been its chairman in which capacity he helped found the Save Capel organisation in 2019. He is active in the local community particularly Capel Cricket Club which he helped re-found in 2011 and serves as their fixtures secretary and frequent scorer. He enjoys holidaying in Europe, particularly Italy where he can practice his increasingly rusty Italian.

In recent months Hugh has survived Prostate cancer and is grateful for the swift and effective treatment provided by the NHS staff in Maidstone, Tunbridge Wells and Eastbourne.