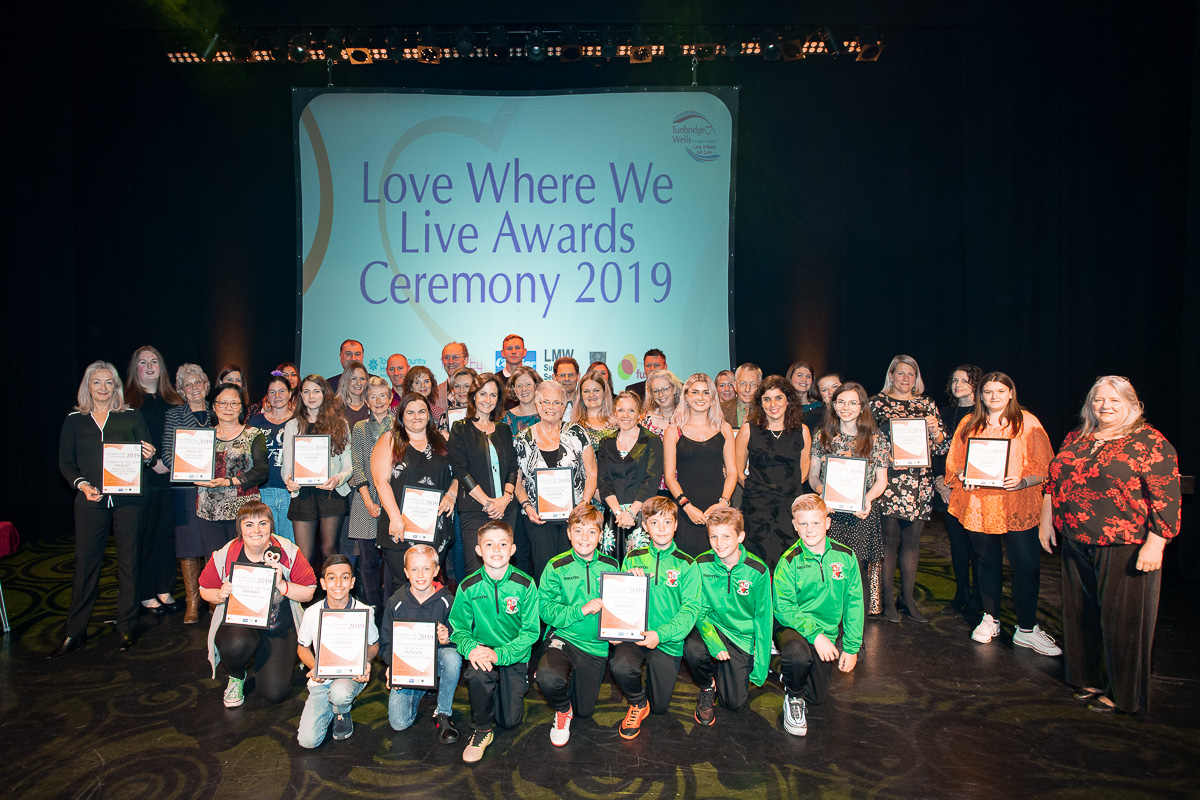 Tunbridge Wells Borough Council’s annual community awards – Love Where We Live Awards – were presented at a ceremony at the Assembly Hall Theatre on Wednesday 9 October.

Ben West was announced as the overall 2019 Love Where We Live Award winner.

Ben, along with his family, set up the Sam West Foundation after his younger brother tragically took his own life in 2018. Ben has gone on to become a campaigner for mental health issues in young people, establishing initiatives such as Project Walk to Talk  and launching a petition, Save our Students, which aims to press the government to make mental health awareness training a compulsory part of teacher training. Ben’s response to his loss has been to do all he can to ensure other young lives might be saved, that other families should not have to go through what he and his family suffered. In his words, “No brother should have to stand up at a funeral and talk about his 15 year old brother, that shouldn't happen.”

Eight awards in total were given out at this year’s ceremony, ranging from Best Group and Ethical Business to Young Sports Achiever and Individual Hero.

Janet Simpson has endeavoured to make Goupie, the Goudhurst based chocolate company,  a company that does not cost the earth physically, or metaphorically. With flexible working hours, 100% recyclable packaging, compostable bags and locally sourced ingredients, Janet has made Goupie into as ethical a business as possible across all aspects of the company.

Becky, Sarah and Gemma have made a difference to so many local families during the past 10 months. They have formed a group offering support and advice to parents of children with Special Educational Needs, investing their own time, money and emotions in to supporting strangers who are in a difficult position. The parents helped so far feel less overwhelmed with anxiety, fear, anger and guilt; they feel empowered and supported and for many this means they can face each day with more optimism that things can improve.

Rita has tirelessly headed the Tunbridge Wells netball league for over 32 years and is now retiring. She and her husband organise all the teams and dedicate four nights a week, come rain or shine, to allow the teams to play in a fun, friendly league. One nominee said:

“I started playing in the league at 17 and I am now 57 and watch my children play. The league has flourished over the years and Rita has dedicated her whole life to it.”

Harley is an acrobatic gymnast who at 11 years of age, has moved from the development programme in his sport to the Federation of International Gymnastics - a much higher level, which has gymnasts up to the age of 18. Harley has faced this new challenge with determination and trains for a minimum of 15 hours a week to achieve the level required. Despite facing injury this year, Harley has been selected to trial to represent the GB squad at the European Championships in Israel later this year.

Eugene is the driving force behind Rusthall Community Cinema. Eugene's vision and ability to enthuse others has created a thriving club with over 75 people attending each film show. Rusthall Community Cinema is growing year-on-year and local interest with it. Without Eugene the cinema would not have started, and would not still be running successfully as a benefit to the community of Rusthall. He is a hero to be celebrated.

Charity of the Year

The other finalists in each of the categories were:

Sports Achiever of the Year Award

Young Sports Achiever of the Year

Charity of the Year Award

Young Volunteer of the Year Award

Sports Training and Equipment awards also were presented to the four runners-up in the sports categories.